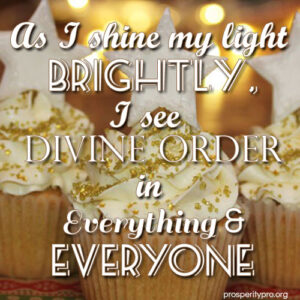 A few weeks ago, I was having one of those days. You know the kind of day I’m talking about. I woke up feeling tired and achy and it seemed that nothing was going my way. I was not looking forward to driving my husband to work. However, because his car was in the shop, I had to drop him off, and then drive to a meeting with a client. Did I mention that it was also my husband’s birthday and I wanted to do something special for him later that evening?

Before leaving, I said a prayer for Divine Order because I felt that this day was going to be challenging in getting everything done that needed to get done. We headed out to take my husband to work and all was well. I dropped him off and drove to the bank to get some cash. My client’s building was valet parking only and I rarely carry cash. Then, having some extra time, I figured that I would grab some coffee at a restaurant. It was hot outside – about 90 degrees and on my way to the restaurant, my air conditioner stopped working. The drive was about thirty minutes and if it is possible to feel like you have melted, then that is exactly how I felt. I went into Steak ‘n Shake, which was the first place I came to after the exit. I was dressed for a meeting, in a green dress and high heels. However, my dress was drenched with sweat. I walked into Steak ‘n Shake and headed straight for the restroom where I removed my dress and attempted to dry it under the hand dryer. Luckily, no one else came in while I was in there.

After about ten minutes, I put it back on, ran a comb through my hair and freshened up my makeup. I sat in Steak ‘n Shake, sipping a diet coke desperately trying to cool off before my meeting. With about ten minutes to spare, I got back in my hot car and drove to my meeting. Fortunately, it was close by so I managed to arrive looking normal – as opposed to looking like I’d been walking through the desert all day.

The meeting went well, except for one thing. I had made an error and forgotten to scan one particular photo for my client. The work was complete except for that one little detail. That meant that I was not going to be leaving the meeting with a check. I had been counting on getting that payment and now, because of that error, I would not be getting paid for a few more days. I was frustrated with myself for my carelessness, but shook it off and set out toward home – with no air conditioning in 90 degree heat.

I had planned on making a cake for my husband, but there was no way I would have time now. We both eat gluten free, so it’s just better if I make the desserts myself. However, there is one brand of chocolate cupcake that we both like and I thought I could get it at my local Publix grocery store. I walked into the freezer section and scanned the gluten-free offerings. To my disappointment, they didn’t carry them at my local store. I then thought that the store nearer to the beach might carry them, since it usually has more of a selection, owing to the touristy location.

Once again, I got into my hot car and sweated all the way to the “Beach Publix.” Here, the young man stocking the shelves assured me that they carried this variety of cupcake. However, upon searching the stock room and the freezer, he concluded that they only had blueberry muffins – no chocolate cupcakes. Well, of course, I could not serve blueberry muffins in the place of birthday cake. That just looks like a lazy substitution to me – not what you do for your hubby’s birthday.

By this time, I was really “melted.” I was exhausted, overheated, and feeling rather defeated in my cupcake search. My next stop was Whole Foods. I was happy to enter the air conditioned store, although by this time, the heat outside had subsided somewhat. I walked straight to the freezer section and Viola’! They had them! I smiled and with a renewed energy and a spring in my step, headed for the checkout. I paid eight dollars for six gluten-free chocolate cupcakes – a price that is about double what I would pay for regular cupcakes – a price that my parents and grandparents could not have afforded. Never-the-less, I was happy to have them.

As I walked out of the store and was about to reach my car, I heard a man’s voice saying “Can you help me? I’m hungry.” He said it once more before I turned around. I saw, on the sidewalk, a very thin, very sunburned man standing there, asking for food. He wasn’t asking for money or the usual five dollars for a bus ticket that we hear in South Florida (which is code for drug money). He was hungry and asking for food. I walked over and handed him a five dollar bill – change from the money I had gotten out for the valet. “Go and get yourself some food,” I said. He thanked me profusely and introduced himself. “My name is Steve. What’s your name?” he asked. He seemed a bit child-like, possibly developmentally disabled. I told him my name and I said, reaching into my bag “Today is my husband’s birthday.” “How old is he?” Steve asked. “He’s… in his forties,” I replied. “I’m 46,” Steve announced proudly. I pulled the cupcakes out of the bag and pried the package open. “We don’t need all of these, Steve. Take one,” I said, offering him the open package. Steve’s eyes grew wide as he gleefully took a cupcake. He thanked me again and shook my hand. As he shook my hand, I held his and silently said a prayer for him. “You’re an angel,” he said happily. I said “God bless you,” and returned to my hot car.

As I sat in the driver seat, I thought about my day. I thought about how I had grumbled about needing cash for the valet. About how disappointed I was when I didn’t get the final payment from my client. I thought about how ridiculous I must have seemed, air drying my dress in the Steak ‘n Shake bathroom. How I had been sad and defeated in my expensive cupcake quest. All of this day had culminated in meeting Steve – a man who is about my age – but who is totally dependent on the kindness of strangers. A man who was made so happy by a gift of five dollars and a cupcake. And I was so grateful to have been right there at that right moment in time. I started my car and the air conditioner kicked on. I realized that my earlier prayer for Divine Order for that day had indeed been answered.

Radiance
Previous Post Embracing the Positive and Saying No to Chronic Complainers Next Post Where is Your Life Compass?

Menu
We use cookies on our website to give you the most relevant experience by remembering your preferences and repeat visits. By clicking “Accept”, you consent to the use of ALL the cookies.
Cookie settingsACCEPT
Manage consent

This website uses cookies to improve your experience while you navigate through the website. Out of these, the cookies that are categorized as necessary are stored on your browser as they are essential for the working of basic functionalities of the website. We also use third-party cookies that help us analyze and understand how you use this website. These cookies will be stored in your browser only with your consent. You also have the option to opt-out of these cookies. But opting out of some of these cookies may affect your browsing experience.
Necessary Always Enabled
Necessary cookies are absolutely essential for the website to function properly. These cookies ensure basic functionalities and security features of the website, anonymously.
Functional
Functional cookies help to perform certain functionalities like sharing the content of the website on social media platforms, collect feedbacks, and other third-party features.
Performance
Performance cookies are used to understand and analyze the key performance indexes of the website which helps in delivering a better user experience for the visitors.
Analytics
Analytical cookies are used to understand how visitors interact with the website. These cookies help provide information on metrics the number of visitors, bounce rate, traffic source, etc.
Advertisement
Advertisement cookies are used to provide visitors with relevant ads and marketing campaigns. These cookies track visitors across websites and collect information to provide customized ads.
Others
Other uncategorized cookies are those that are being analyzed and have not been classified into a category as yet.
SAVE & ACCEPT